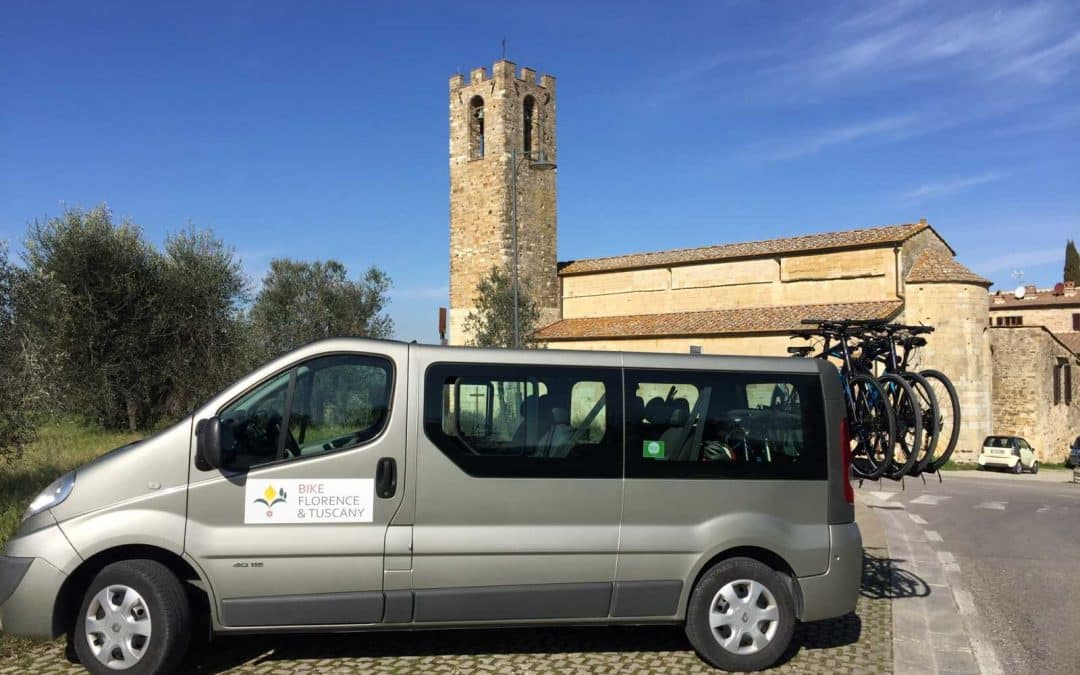 The simple pleasure of a full bodied wine or a calming view above hectares of green vines are as much a part of enjoying your holiday in Tuscany as visiting museums or art towns. Depart with us from Florence to discover what makes Chianti a unique area: its reputation extends way beyond the quality of its famous wines.
Expertly guided by Elena & Piero come discover enchanted medieval villages and the stillness of their breathtaking landscapes. 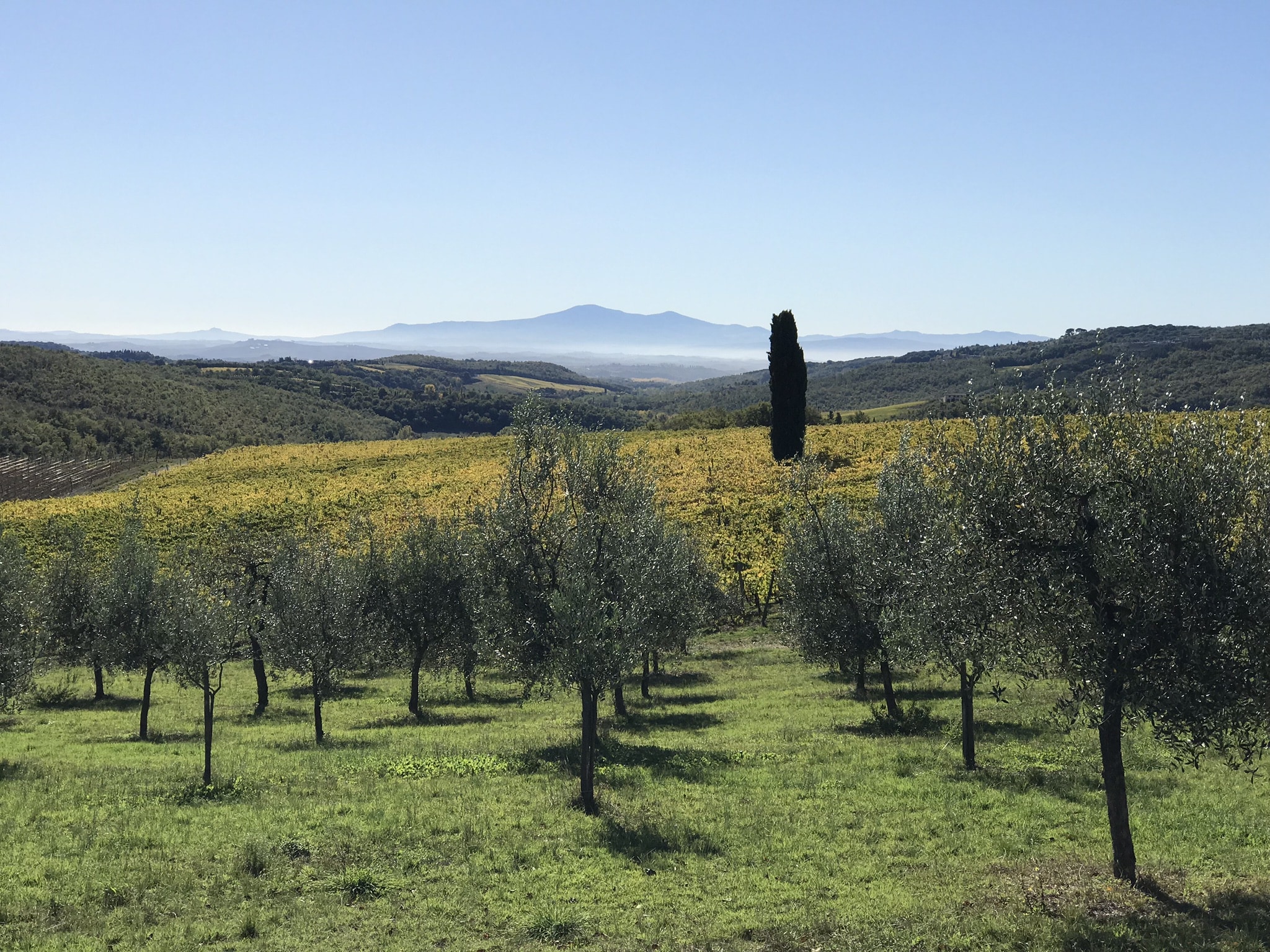 Bike tours around Florence in CHIANTI –

The word “Chianti” is one of the most famous Italian words in the world. Chianti is not only a worldwide known wine, but an entire geographical area (consider approx. 10thousand hectares!).
Its vineyards and soft-hedged hills make Chianti one of the most beautiful ares of Italy!
You will be amazed by the abundance of silver green olive trees and the geometry of the curvy roads lined by quiet cypress trees. Colors change from season to season, from red and yellow in autumn to a full spectrum of shades of green in spring and summer. In short, Chianti is a magical place that can be admired all year round, accompanied by good mood and a great sense of peace.
No wonder its mild climate, lush vegetation and fertile soil have welcomed the firsts settlements since the 2nd millennium BC. The Etruscan were the first to modify the Chianti landscape by cultivating the terrain with grapes and olive plants. Romans and Lombards  developed further the area founding villas, farmhouses or “curtis”, fortified clusters of buildings.
The traces of this long history are well visible through the aspect of the landscape where we can still admire fortified villages like San Donato in Poggio or Castellina in Chianti. 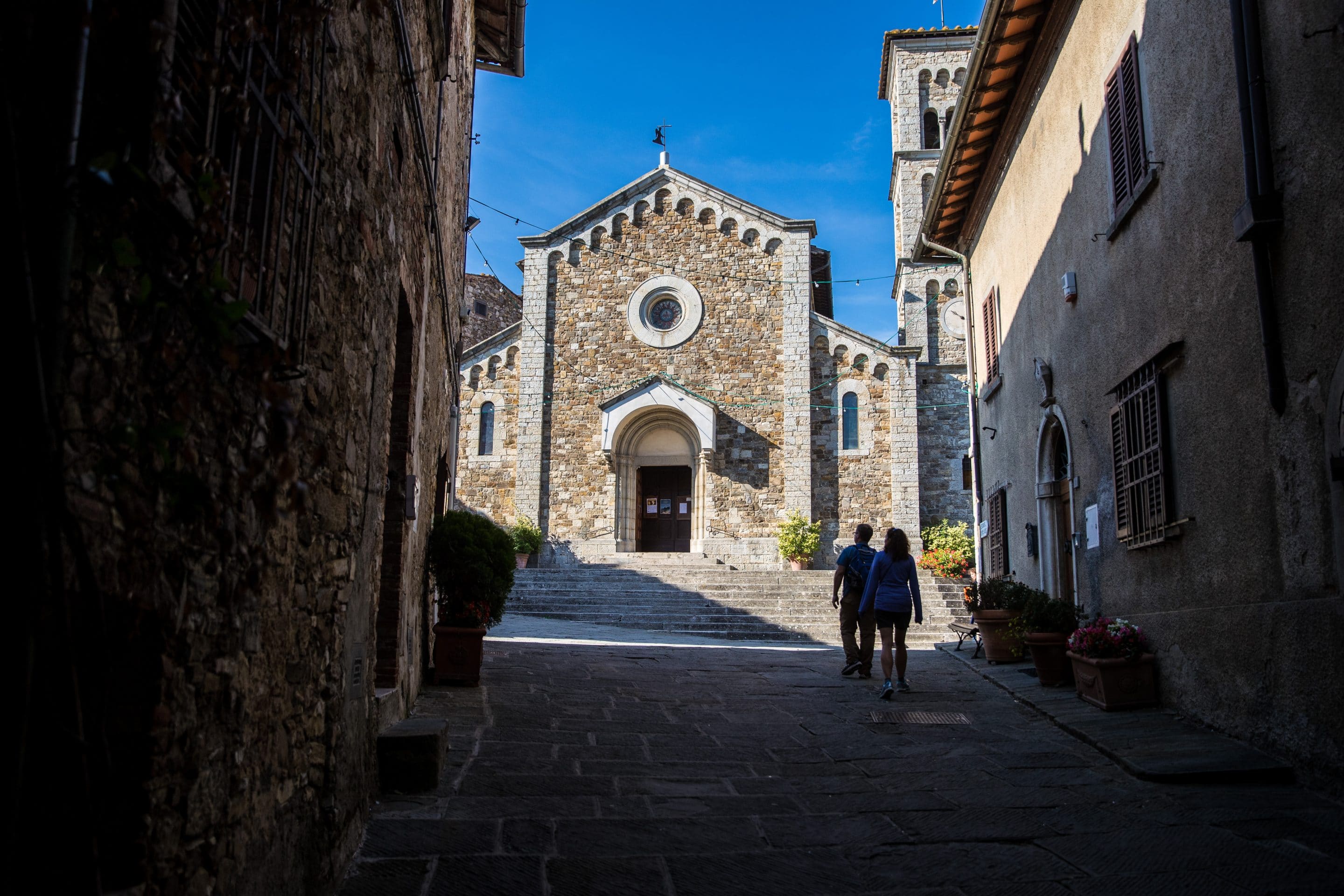 Bike Tours around Florence in Chianti with Elena&Piero

When you happen to search for bike tours around Florence in Chianti you’ll likely bump into classic itineraries where big coaches take tour groups to Greve in Chianti, or stop in large properties which welcome long tables for wine tastings.
Elena&Piero, as local experts guides, still confess that after 15 years of experience (and thousands of Km biking in Tuscany)  didn’t complete the mission of touring every single corner of our wonderful land, made out of white roads, small strongholds and farmhouses pierced among the generous countryside.
If you are not a mass-tourist and love to discover places off the beaten path
Bike Florence Tuscany biking tours are the right choice for you! 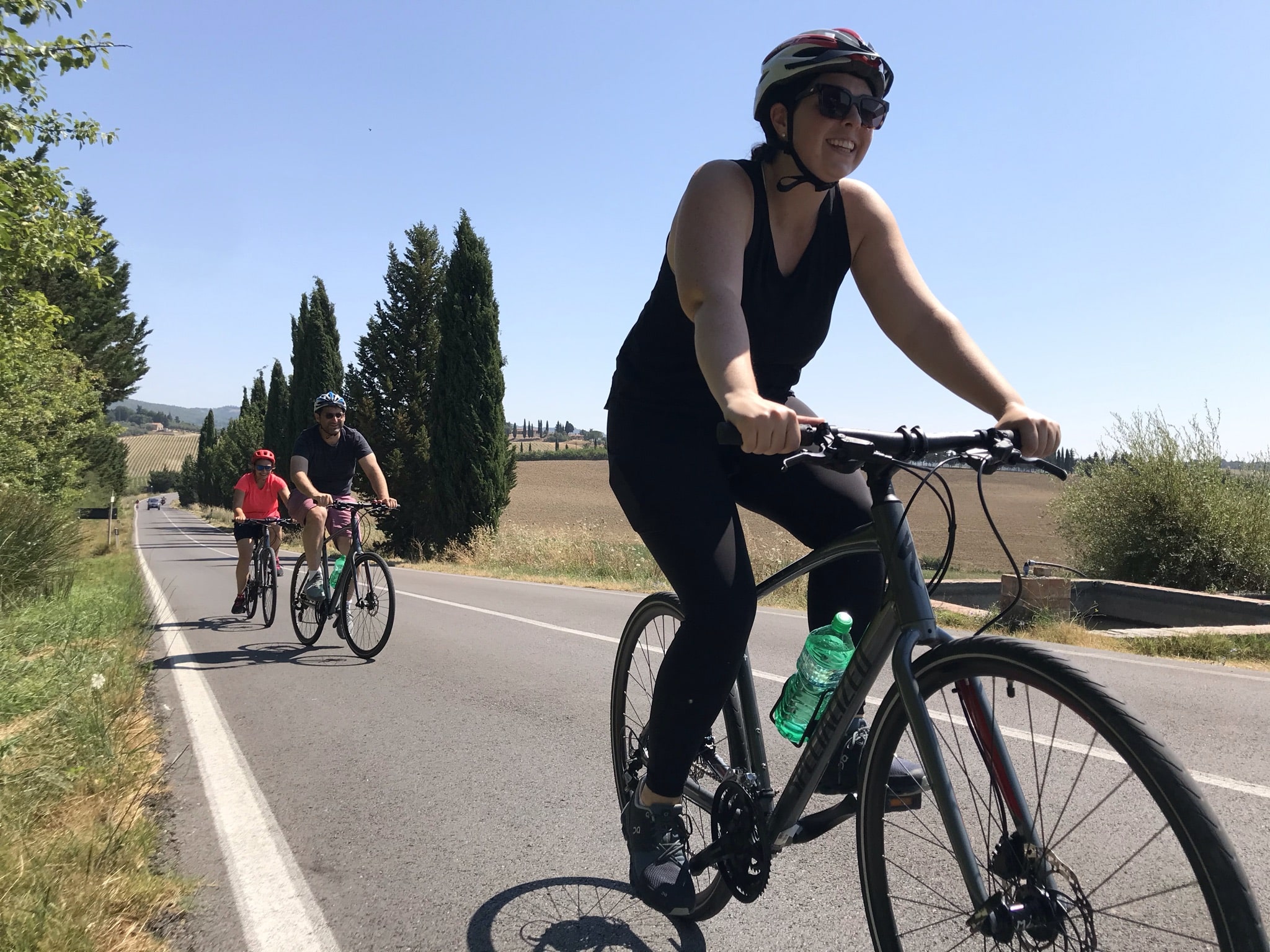 Bike tours around Florence with Elena & Piero – WHAT WE DO

Well… first of all sit back and relax 🙂
Our air-condictioned comfy van is going to drive you out in the countryside to discovery the roots of Chianti between Florence and Siena.
Our amazing journey back in time starts from San Donato in Poggio, ancient walled hill-top hamlet where nowadays seniors still sit by the entrance of the only coffe-shop of the town watching the world (slowly) go by and  playing  cards.
During the summer and the fall local festivals keep people busy for the Patron Saint’s day with big boiling pots of goodies.

San Donato in Poggio – a little bit of history

San Donato in Poggio is a medieval town nestled on the top of a hill (“Poggio”) overlooking the valley of the river Pesa and river Elsa. Ancient parchment documents witness the presence of this fortified town since the X century, when it was controlled by the Abbey of Passignano. It was first named San Donato in “Loco Poce”, (thus San Donato in Poggio), fortified by town walls since 1033  as it soon gained a strategic importance to control the Roman road Cassia, connecting Florence to Siena.
As you walk thru the grand Porta Fiorentina (The Florentine Gate) you’ll be soon transported into this enchanting atmosphere that survives through the delightful alleys and the huge watchtowers. Enjoy the colorful geraniums framing portals and arches made out of traditional white stones of Chianti. We will walk to the central square which opens up to elegant mansions like Palazzo Ticci and Malaspina.
It’s now time to sip a good espresso served at the local grocery store-coffe shop next to
Porta Sienese admiring the stunning view all around us. 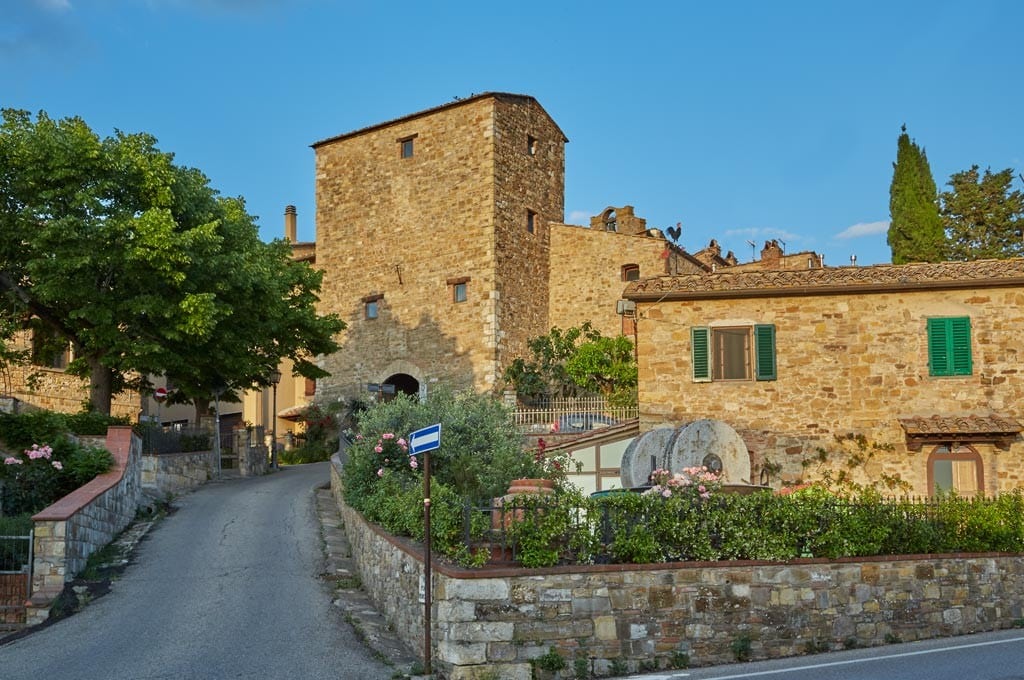 Bike tours around Florence & San Donato in Poggio : a bit of history

Nastled on the top of a hill – Poggio – overlooking the valley of the river Pesa and Elsa San Donato in Poggio is truly a little hidden gem of Chianti.
Ancient parchment documents witness the presence of this fortified town since the X century, when it was controlled by the Abbey of Passignano. It was first named San Donato in “Loco Poce”, (thus San Donato in Poggio), fortified by town walls since 1033  as it soon gained a strategic importance to control the Roman road Cassia, connecting Florence to Siena. 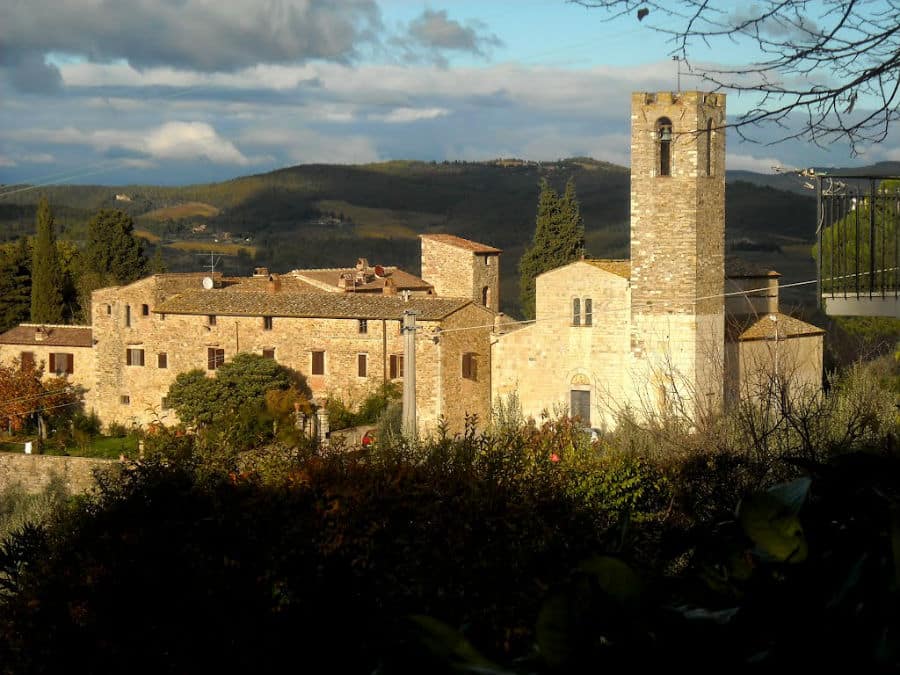 Due to its commercial importance, San Donato in Poggio became the head of a local League, led by a Podestà (chief magistrate) chosen by the Florentine Republic.

Bike tours around Florence : the wonders of Medieval tows

Hard to believe that the parish church of San Donato (Pieve)  has just celebrated the millennium of life and still preserves the most typical example of the Romanesque architecture in the Chianti Area.
The small church looks very simple in its three aisles and tall bell tower, all built in pure ivory white stones of Alberese- IT’s the same rock you’ll see biking al the way towards Siena.
And you’ll learn from our expert wine guides this is exactly the terroire ingredient which gives the robust body to the Chianti Classico Wine – Black Rooster on the lable 😉
From this suggestive small village let’s move on : get ready for your memorable Chianti experience! 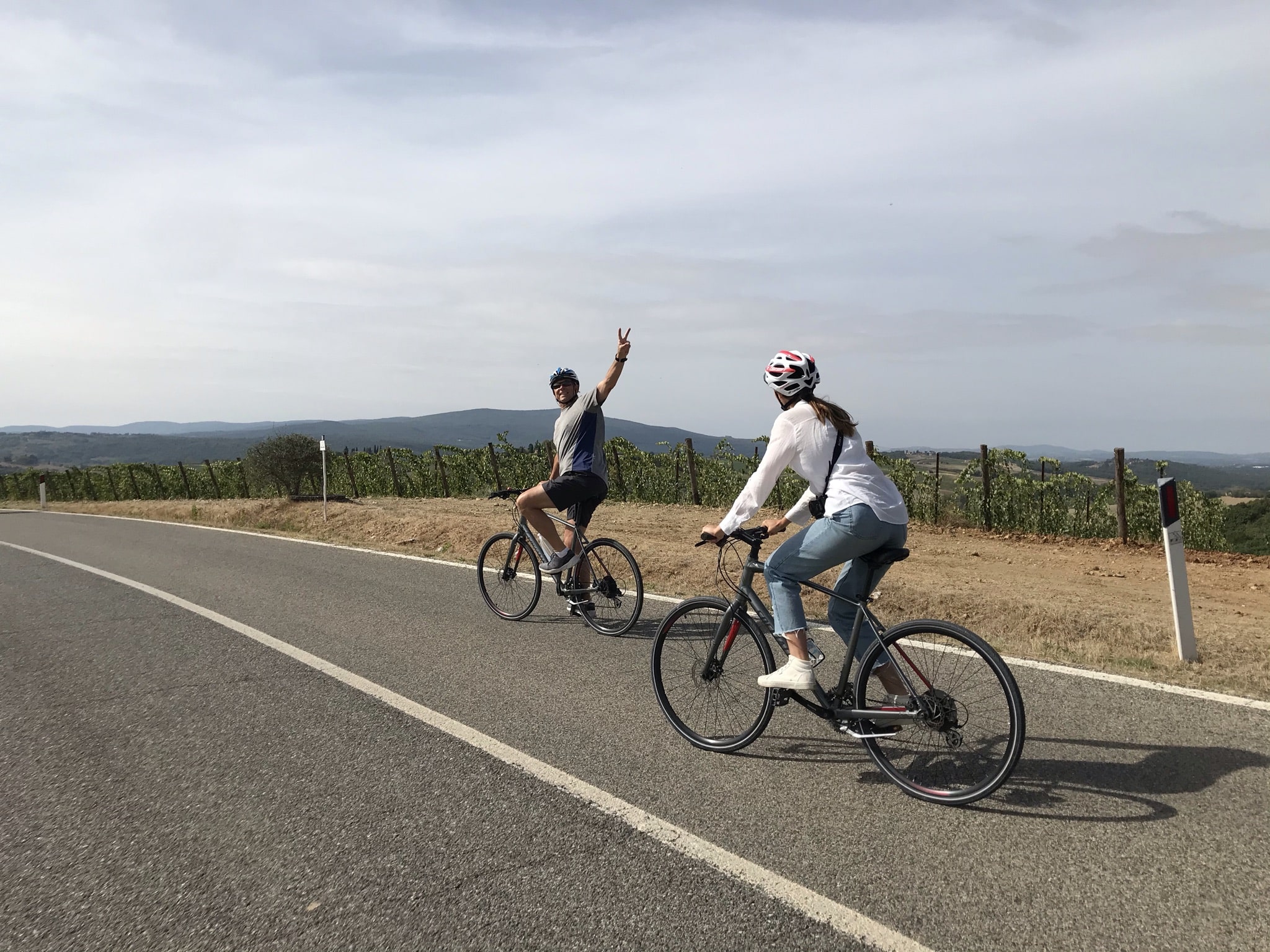